The success of any organism in the world's oceans is determined by the capability to persist under variable environmental stresses. A key stressor is light and in particular the short-waved ultraviolet spectrum, which can cause significant damage or mortality to phytoplankton and benthic reef primary producers (Boelen et al., 2002, Agusti and Llabres, 2007, Llabres and Agusti, 2010, Godoy et al., 2012).

To protect against this damaging radiation, some species accumulate UV-protecting pigments, which prevent ultraviolet light from reaching and consequently damaging vital organelles. One such class of pigments that has been found to be common amongst phytoplankton, macroalgae and corals are mycosporine-like amino acids (MAAs) (Banaszak et al., 1998, Sinha et al., 2001, Rosic and Dove, 2011).

While this protective strategy has proven to be successful in reducing photodamage in larger phytoplankton cells, it is not effective in picophytoplankton as the small cell diameter does not allow the accumulation of a sufficiently large pigment layer (Garciapichel, 1994). That cell size is an important factor determining susceptibility to photodamage has been demonstrated for the two dominant marine cyanobacteria genera. Cells of the smaller-sized genus Prochlorococcus showed signs of photodamage at lower doses than in the larger Synechococcus (Llabres and Agusti, 2006, Llabres et al., 2010), which potentially gives the latter an advantage in high UV-light environments and surface layers. This is particularly applicable in the Red Sea, which experiences one of the highest UV irradiations in the world while at the same time the waters are ultra transparent with extremely low light attenuation coefficients.

To study the effects of UV-B irradiation on Red Sea phytoplankton, macroalgae and corals, we run ex situ experiments in incubators and aquarium setups at the Red Sea Research Center, incubation experiments onboard the research vessel R/V Thuwal, and determine UV-B impacts in situ at local coral reefs. Effects of UV-B are analysed across a range of organismal levels ranging from molecular (gene expression, DNA damage) and physiological (enzymatic activity, metabolic rate) to changes in mortality rate and community structure. 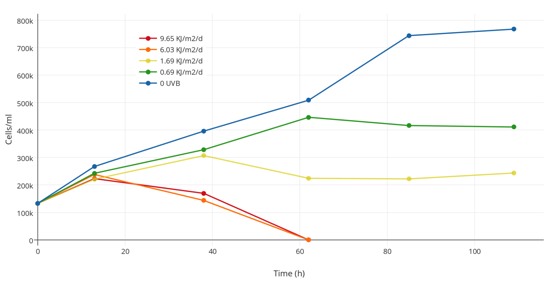